Recommended for ages 10 and over.

The 1930s were considered the “Golden Age of Aviation.” During this time, aircraft design evolved significantly. One of the driving forces behind this evolution was air racing. Numerous pilots poured money and time into developing faster and faster airplanes, in order to compete for the prestige of being the fastest man in the air. One such pilot was Roscoe Turner. 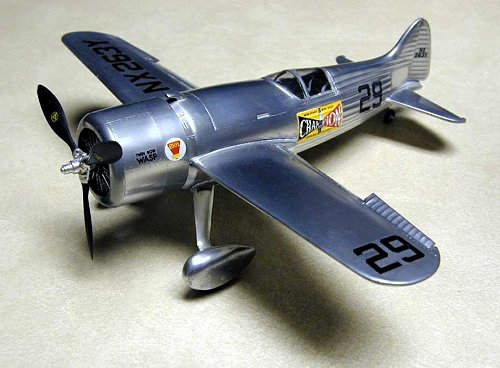 Born near Corinth, Mississippi in 1895, Roscoe Turner grew up with a thirst for speed. He became a pilot, and after a varied career in aviation, began racing in 1928. By 1935, he had already won both the Bendix and Thompson trophies, but the need for greater speed was gnawing at him. In 1936, Turner contracted with the Lawrence W. Brown Aircraft Company in California to build him a new racer.  Turner designed the airplane himself and Professor Howard Barlow of the University of Minnesota engineered it. The design was a full cantilever, mid-wing monoplane with fixed gear. Since Turner was convinced that power would overcome aerodynamics in racing, the airplane was powered by a great big honkin’ Twin Wasp Sr., 1830 cu. in. 1000 hp. radial engine, which gave the airplane its unusual shape (i.e., virtually all engine, similar to the Gee Bee design).

Turner entered his new racer, dubbed the “R-14 Meteor”, in the 1937 National Air Races  (Thompson Race) and was in the lead until the final lap, when he had to recircle a pylon he had missed. Nevertheless, Turner placed third with a speed of 253.8 mph.

Turner, sponsored by Pump Engineering Service Corporation or “Pesco”, entered the Meteor in the 1938 Nationals and this time he won (speed: 283.4 mph), becoming the first two-time winner of the Thompson Trophy.  In 1939, Champion Spark Plugs sponsored Turner and the Meteor in the Nationals. At this race, Turner won his third Thompson Trophy with a speed of 282.5 mph, and then announced his retirement from racing. Turner subsequently returned to Indianapolis to operate the Turner Aeronautical Corporation until he died in 1970.

The Meteor hung from the rafters of the company’s main hangar until it was restored and placed in the Turner Museum in Indianapolis. When the museum closed in 1972, Turner’s Meteor was donated to the National Air and Space Museum, where it now resides at NASM ‘s Garber Facility in Suitland, Maryland.

Life is too short to live without the Round2 1/32 Scale Lindberg Laird Turner Plane Plastic Model Kit (Lvl 2) HL70562. Be happy. Be Content. Be Satisfied.

Inventory Last Updated: Jan 30, 2023
Back to Round 2 Plastic Models
Use left/right arrows to navigate the slideshow or swipe left/right if using a mobile device