The Lockheed Martin F-22 Raptor is a single-seat, twin-engine, all-weather stealth tactical fighter aircraft developed for the United States Air Force (USAF). The result of the USAF's Advanced Tactical Fighter (ATF) program, the aircraft was designed primarily as an air superiority fighter, but also has ground attack, electronic warfare, and signal intelligence capabilities. The prime contractor, Lockheed Martin, built most of the F-22's airframe and weapons systems and conducted final assembly, while Boeing provided the wings, aft fuselage, avionics integration, and training systems.
The aircraft was variously designated F-22 and F/A-22 before it formally entered service in December 2005 as the F-22A. Despite its protracted development and various operational issues, USAF officials consider the F-22 a critical component of the service's tactical airpower. Its combination of stealth, aerodynamic performance, and situational awareness enables unprecedented air combat capabilities.
Service officials had originally planned to buy a total of 750 ATFs. In 2009, the program was cut to 187 operational production aircraft due to high costs, a lack of clear air-to-air missions due to delays in Russian and Chinese fighter programs, a ban on exports, and development of the more versatile F-35. The last F-22 was delivered in 2012. 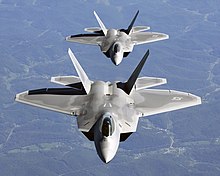 Imagine if you could be satisfied and content with your purchase. That can very much be your reality with the Academy 1/72 Lockheed Martin F-22A Raptor Air Dominance Fighter ACA12423.